What do we know about unplanned settlements in Kigali, Rwanda?

Laterite conducted a multi-dimensional field survey of 1,594 households in Kigali's unplanned suburbs, in close collaboration with the City of Kigali and with funding from the International Growth Centre (IGC). Laterite's policy brief summarizes the key findings of this work, and the implications of these findings for urban policy in Kigali.

The city of Kigali has been growing rapidly in recent years. With an estimated annual growth rate of 4-7%, half of Rwanda's urban population now resides in the city.

Infrastructure and housing development have struggled to keep pace with the city's rate of growth, and 'unplanned settlements' have formed to fill the gap.

According to official statistics, 79% of Kigali's households live in unplanned areas. To date, information on these residents has been limited.

This project aimed to overcome the knowledge gap on the socio-economic situation of residents in unplanned settlements and to inform future policy decisions. 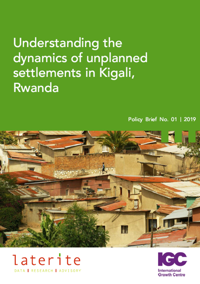 This work was carried out in collaboration with the City of Kigali and funded by the IGC. The full report "The dynamics of unplanned settlements in the city of Kigali" is available online.